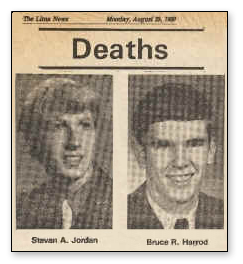 On August 24, 1980, Bath Township Fire Department suffered its first line of duty deaths. Firefighters Bruce Harrod and Steve Jordan, who also served as divers on the department’s Dive Rescue team, were assisting law enforcement personnel at the Ford Motor Company Lima Engine Plant quarry in search of a homicide weapon. During the dive, Jordan and Harrod encountered an unknown problem and failed to surface. Fire department personnel and local divers on the scene were able to bring them to the surface, but resuscitation efforts were unsuccessful.

A permanent monument to both firefighters is located in front of the fire station at 1787 N. Dixie Hwy., Lima, Ohio.